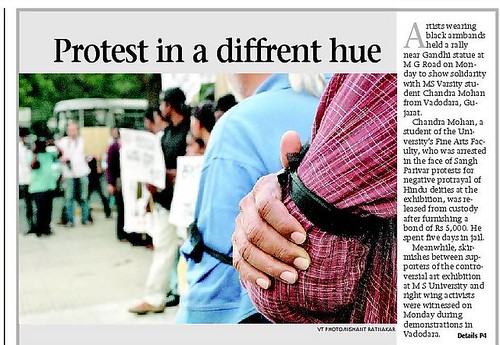 Chandramohan was arrested on the charges of alleged obscene display of Hindu deities at an exhibition at Maharaja Sayyaji Rao University in Vadodra. He was finally released on bail. But the events leading to his release consisted of demonstrations at every major city or town which nurtures art-form of some kind. This meant that photojournalists across the nation had to go cover another protest in a nation where every other day one gets to see group of people walking down the street carrying banners and shouting slogans.

Monday the 14th May, time to visit MG(Mahatma Gandhi) statue located at beginning of MG road. MG statue has become the symbol of protest marches and dharna in Bangalore. When I was on trial for reportage I had to ride down to this place everyday to cover a protest. But now the publication I work for has turned into a tabloid and hence protests somehow are considered to be a routine event which only broadsheets are to cover. It meant that the sight of footpath opposite MG statue had turned into a rarity for me. So this was revisiting the place where it all began.

There I was, standing amidst sea of cameras consisting of both still and video. It seemed like this group of artists in Bangalore were destined to get a lot of footage for the outcry. Reporters and TV models (oops, I mean the pretty little things who are hired to be TV journalists ;D , Just kidding) were busy getting interviews with the ‘Arty’ crowd of the city. Quite a few people whose faces were regularly seen in page 3 supplements were surprisingly there holding banners. It looks like some people were keen on attempting a jump from Page 3 to Page 1. God bless them in their endeavors.

Too many cameras, and visual repetition of images of people holding banners. What satisfaction does it give to make a similar image? Pretty mundane, I must admit. At this point let me confess something, every assignment I am sent to (however absurd the story maybe) I seriously look for the angle and perspective which has eluded every other lens. And I am sure lot of other photographers hunt for it. So there is this treasure hunt or a silent battle of finding that frame which has deceived every one’s sight. Not everyday I end up successful in this attempt but I sure give it my best shot.

Banners, banners, banners! I am so bored of it. I was desperately experimenting to get something different out of this. Neither were there expressive faces to get some compelling portraits nor any power-packed clash between authorities and the protesters. I moved to one corner of the protest and viewed through the lens to see how the line of protesters look like from there. There was nothing impressive except for the angle. Wait a minute, what do we see here. These chaps were wearing black arm bands. Well, something was cooking in my head. Few minutes later I had my frame with the focus being on the black arm bands rather than banners and faces of people.

The picture told me a story and I hoped it could tell the world a story. That is what I, a photojournalist looks for at the end of the day. But, question at that moment in my mind was: Will such experiments with new ideas work in Indian print media? Will they accept this picture or will they ask me for a photograph with “More people! Famous people!Page 3 Celebs! And banners! And action shot of people trying to scream!”. It wasn’t a logistical problem as I had framed these conventional shots too. But, the fact is that it hurts a lot when your substandard works are given the limelight when your hard-thought favorite works are forgotten. Your approach and your way of thinking is never known to the world. Your identity is relegated to a newspaper byline like ‘Photo by xyz‘, and that’s all.

Back in the office, I gave prints and location of the digital images to the news-editors and hoped for the best. Next day morning when I came back to office I was thrilled not only to see this photograph being selected from the lot I had given, but also at the fact that it made it to the front page. It may not be an excellent work but surely it feels good to have your hard work rewarded with something called as ‘job satisfaction’.

Phew! The depth… u got it jus perfect