Editorial photography can be full of surprises at times. Most often I will know beforehand if the shoot is a cover story. In very rare cases, the story gains a lot of importance post the shoot and it becomes a candidate for a cover story. Hence as a photographer, it makes sense to try to photograph beyond the brief given by the editorial clients, and not just limit the shoot to the brief. That’s what led to the photographs from this shoot making the cover of Forbes magazine in India.

A couple of months ago, I was commissioned by Forbes India Magazine to photograph the PhonePe app cofounders Sameer Nigam and Rahul Chari at their workspace in Bengaluru. PhonePe is a brilliant payments app working on UPI (Unified Payments Interface), an instant real-time payment system in India.

Connection with the subjects

As a portrait photographer, one of the main tasks for a successful portrait is to make connections with the people whom I photograph. In that context, portraiture is a collaboration between a photographer and his model/subject.

I had started using the PhonePe app couple of weeks prior to this shoot during an emergency when other banking apps had failed me. So, when I first met Rahul and Sameer, I shared my initial experience with their app and that set the ball rolling for our conversations. This allowed me to make break the ice and make a good connection with the duo, and that helped a great deal in this shoot.

During mid-2017, I switched my camera systems completely from DSLR to mirrorless cameras. Since, then I have been consistently using the Fujifilm X series gear for Editorial, Portrait, Corporate, and Wedding photography. I haven’t missed my old canon DSLRs at all. I’ll shortly write a separate post on making this switch to Fujifilm S series camera system.

My main Camera and lens for the portrait are Fujifilm XT2 with XF50mmF2 WR lens.

The supporting camera is Fujifilm X-T20 and XF23mmf2 lens.

One of the best decisions that I made a couple of years ago was to invest in Godox system of flashes and portable strobes. Godox has a scalable system of portable lights working on its 2.4Ghz radio system. When I switched from Canon to Fujifilm, I didn’t have to sell any of the Godox lights for Canon as their lights are brand independent when used as off-camera lights.

On this shoot, I primarily used Godox AD600 and Godox AD360II

Editorial and on location photography work is done at great ease if one has a team or people to assist you during the shoot. It is hard to do it solo (Not impossible, but harder if done on own. I have done a lot of portrait work on my own too). 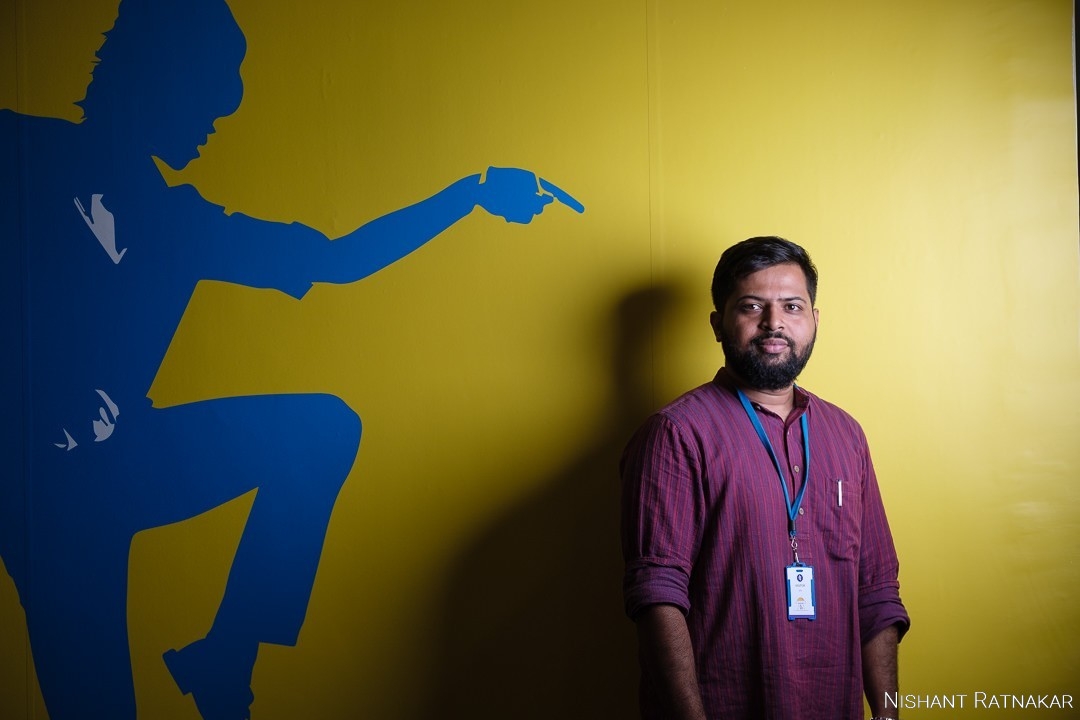 During this shoot, I had photographers Krishna Adoni and Guru assisting me. Along with handling lights, one of the less spoken tasks of assistants is that they are the temporary subjects to test & set the lighting and compositions before the real subjects arrive. This is vital as most often our editorial subjects are busy industry heads, CEOs, athletes, celebs who have strict time schedules for the day and may not be able to devote more time for the shoot.

Hence, I devote some amount of time before the actual shoot for the following: 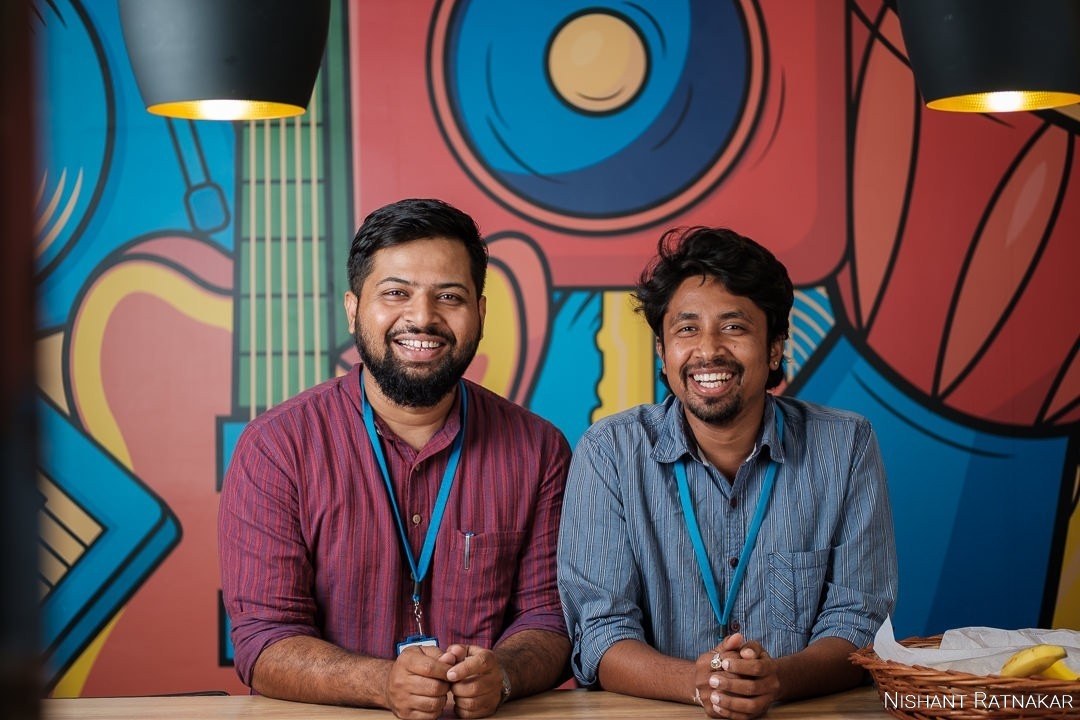 Thanks, Krishna and Guru for helping me during this shoot! 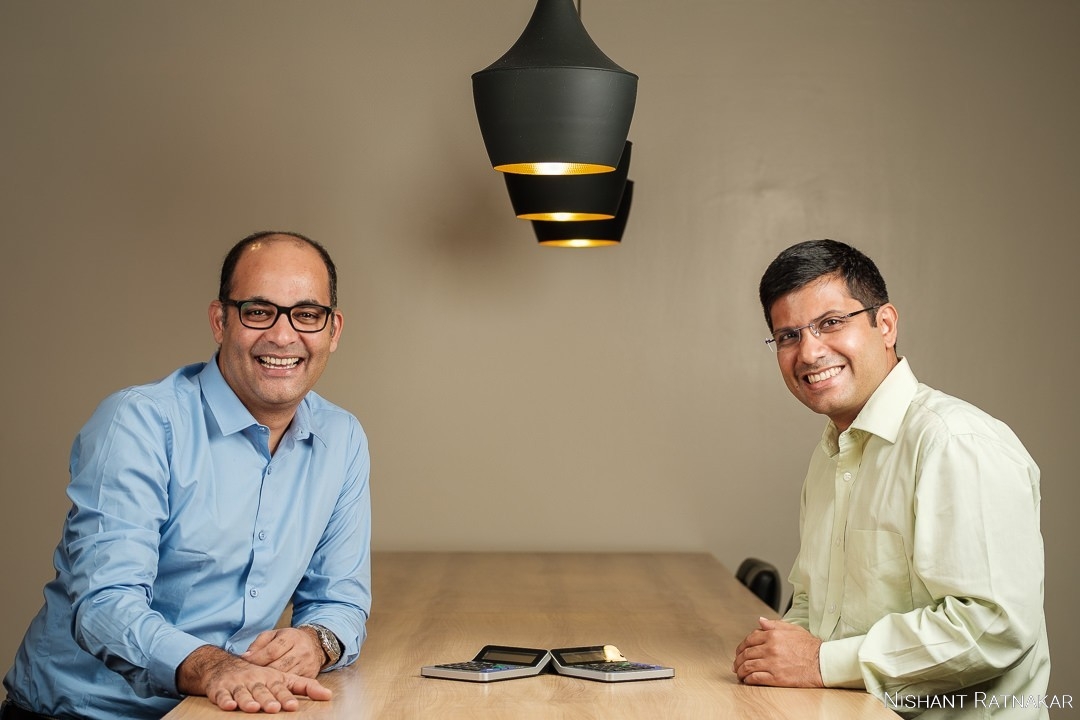 Once Rahul and Sameer were in front of the camera, we went ahead and made initial pictures are per the brief. I made a series of environmental portraits of the duo. A lot of them were horizontal images suitable for use as lead pictures to accompany a story. There was a little tweaking of lights and composition to get it right to suit their height and skin tones.

Post that I began to experiment and try out some vertical portraits against a nice yellow wall which I had zeroed in on during the recce of the space. 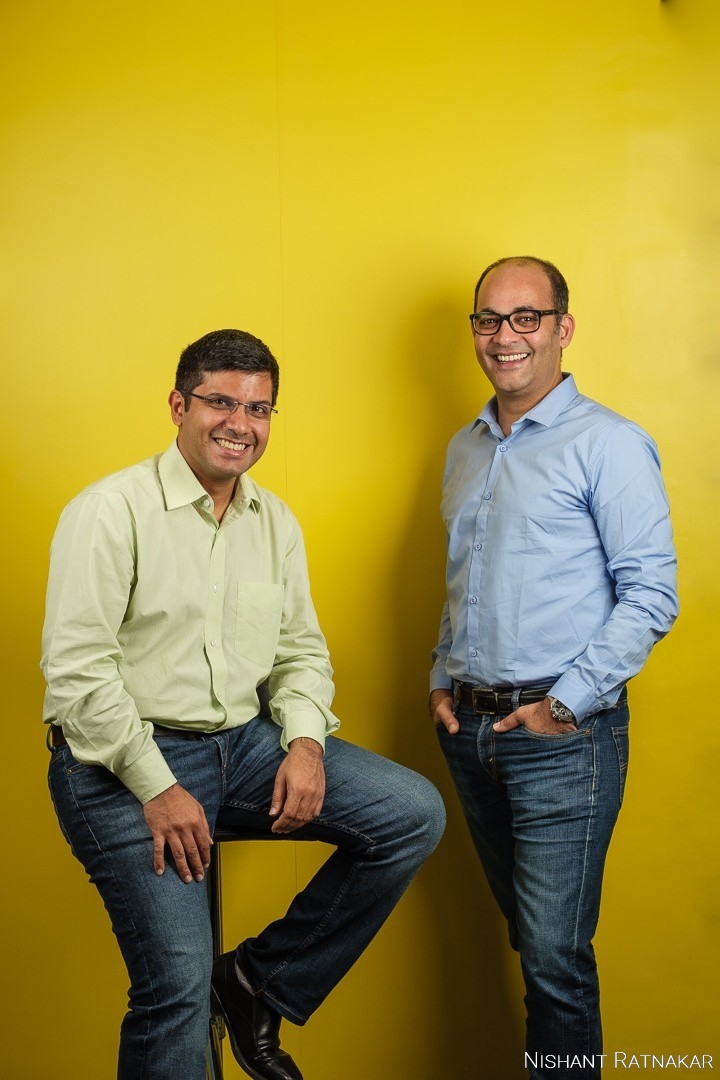 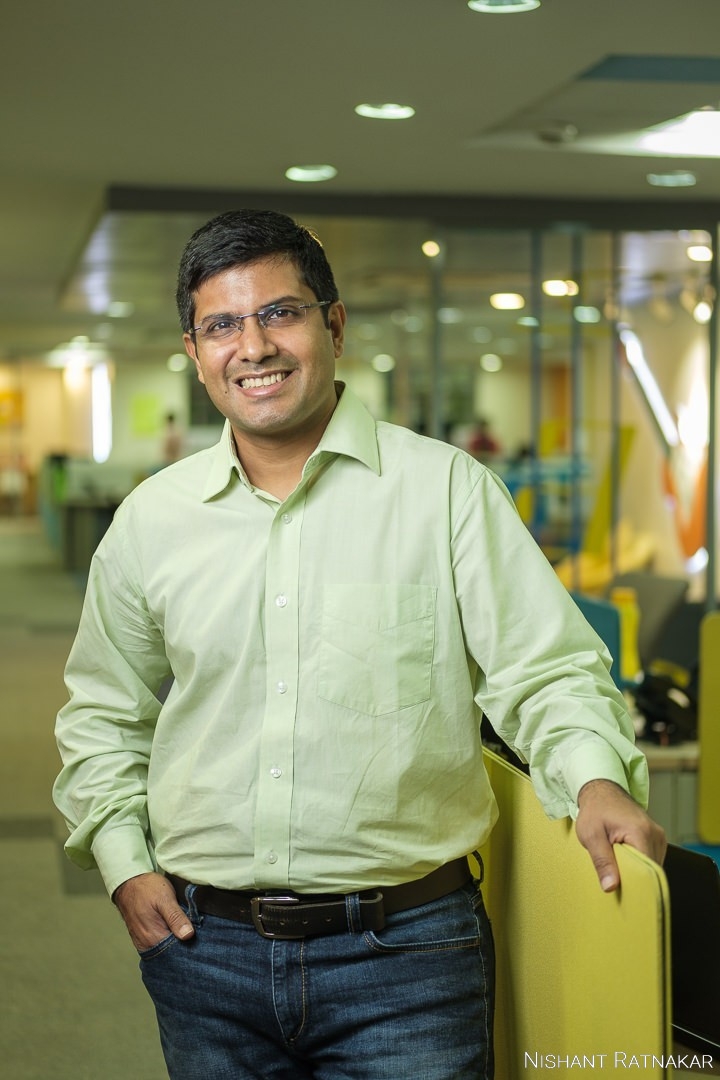 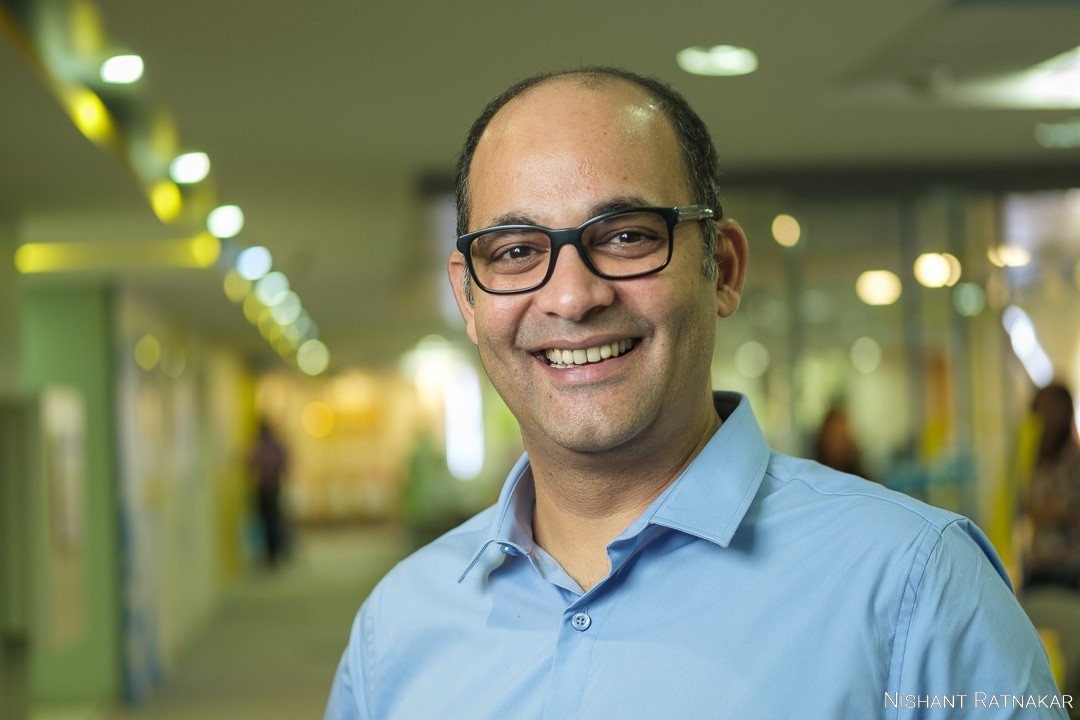 And then it was a wrapup!

So, a couple of days after the shoot, I got to know that the story on PhonePe was a probable cover story. Did I have something suitable for the Cover?

And so it happened. The experiment with the yellow wall did pay off. It was the Cover shot for the edition and a variation of it got a full-page spread into the contents section of the edition too. 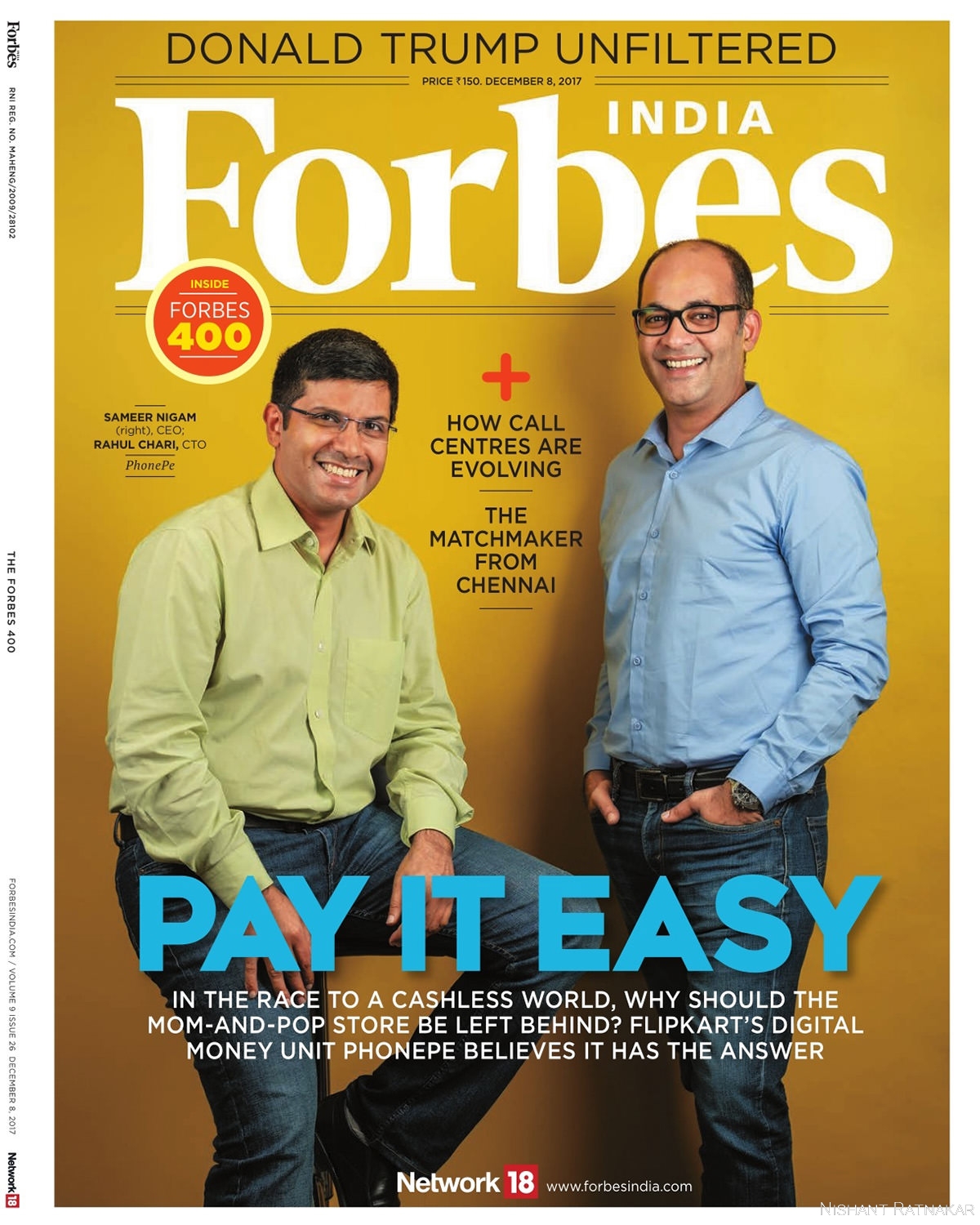 What about the horizontal images that I had made as per the brief?

That got an even better space – a lavish double spread portrait on Forbes Magazine! Seeing photographs in print is completely different experience than watching images on a digital screen. Trust me on that! Go ahead and print some photographs! Don’t let the images be forgotten on a hard drive.

Did you like reading this blog? Then please share it with others using one of the sharing options given below.

Do you want me to make some portraits of you? Then please reach out to me using the contact form at this link. I look forward to hearing from you.